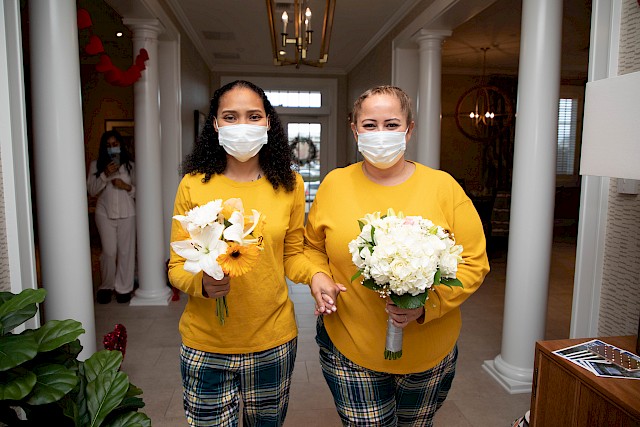 Arlene and Layla Sibetang were friends for years before they started dating. Once they were together, they parented their five kids, fought illness, and rooted each other on as Arlene became a firefighter. When Arlene was diagnosed with an aggressive, stage-4 cancer, the couple wed at the Palo Alto Fisher House and settled in to fight it together.

When Arlene Sibetang, an Army vet, woke up next to her fiancée in the Palo Alto Fisher House on December 29, 2021, she was a little annoyed. Her chemotherapy appointments weren’t until the afternoon, and she wanted to sleep in. But Layla was insistent, “No, you’ve got to wake up. Wake up. You said you wanted to marry me, right?”

They hadn’t discussed dates, rings, flowers, or guest lists, but a chaplain walked into the room. “I heard you want to get married?” Arlene looked at Layla. “What did you do?” 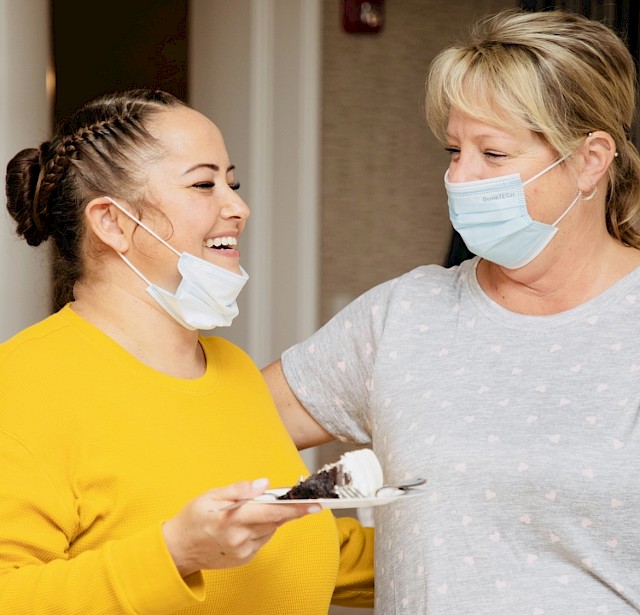 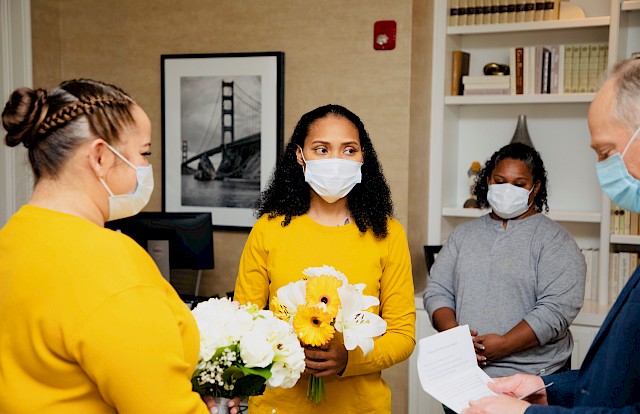 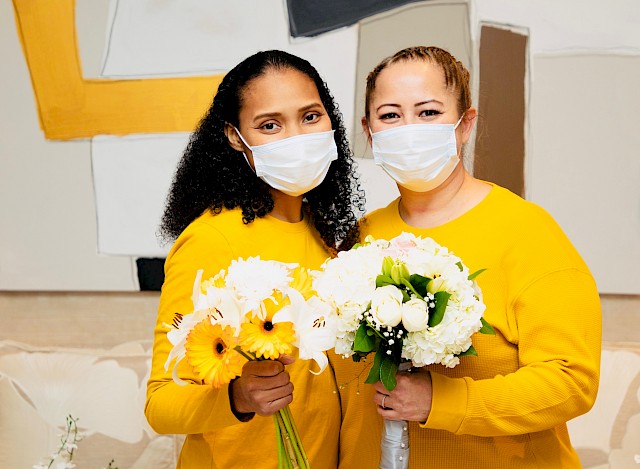 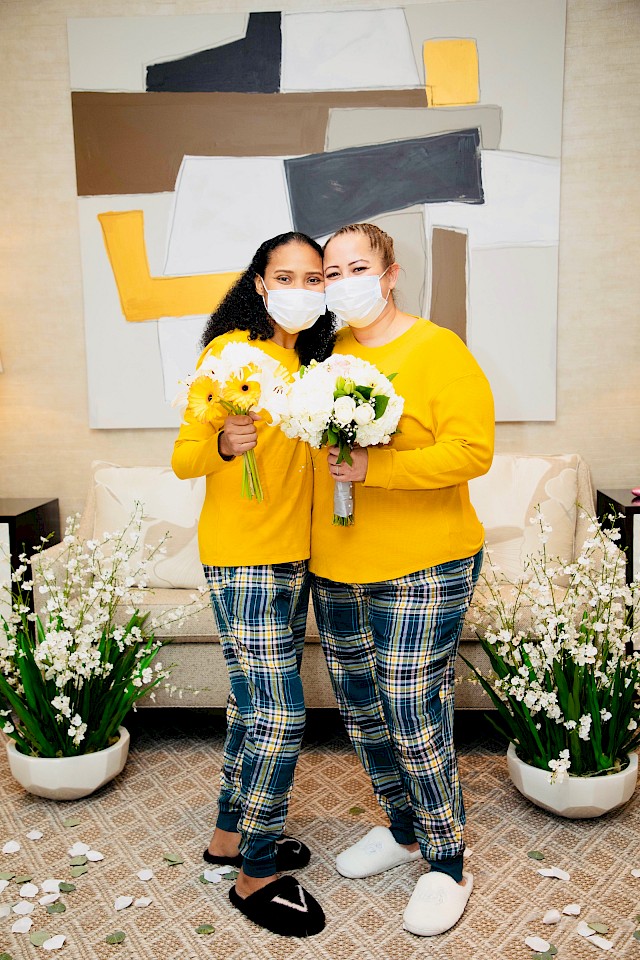 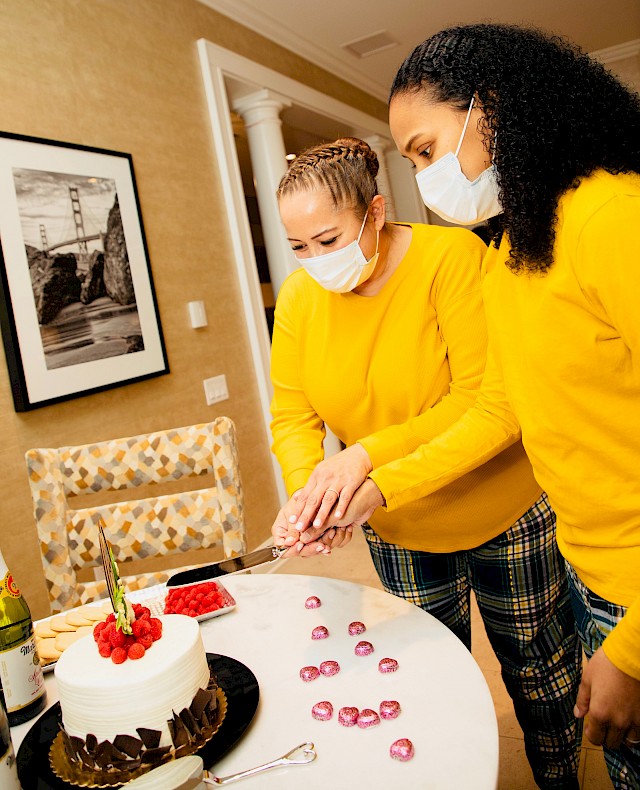 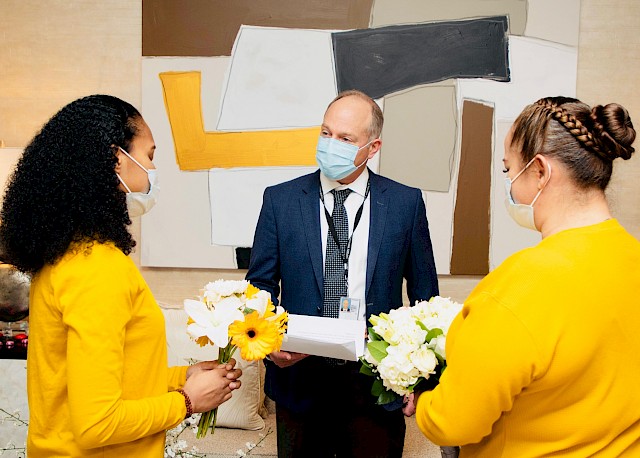 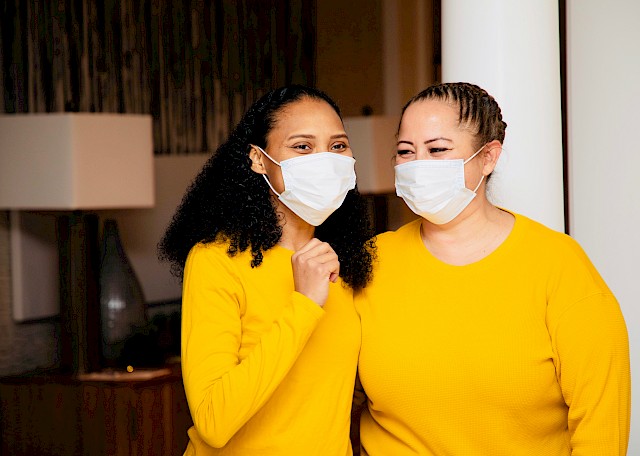 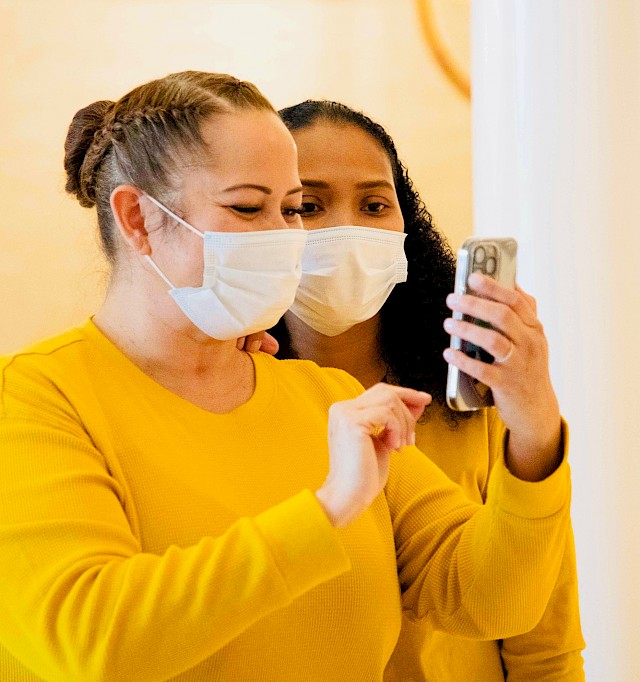 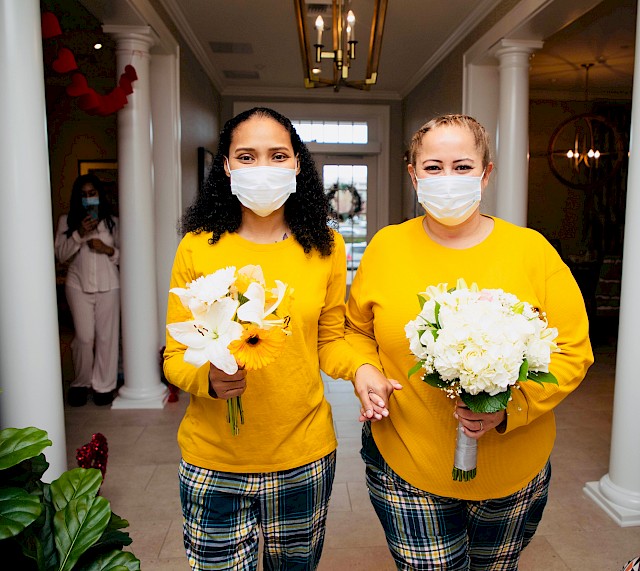 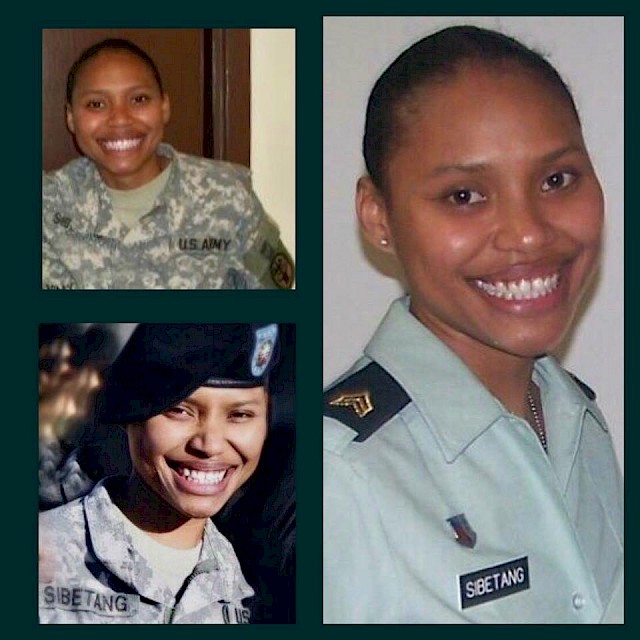 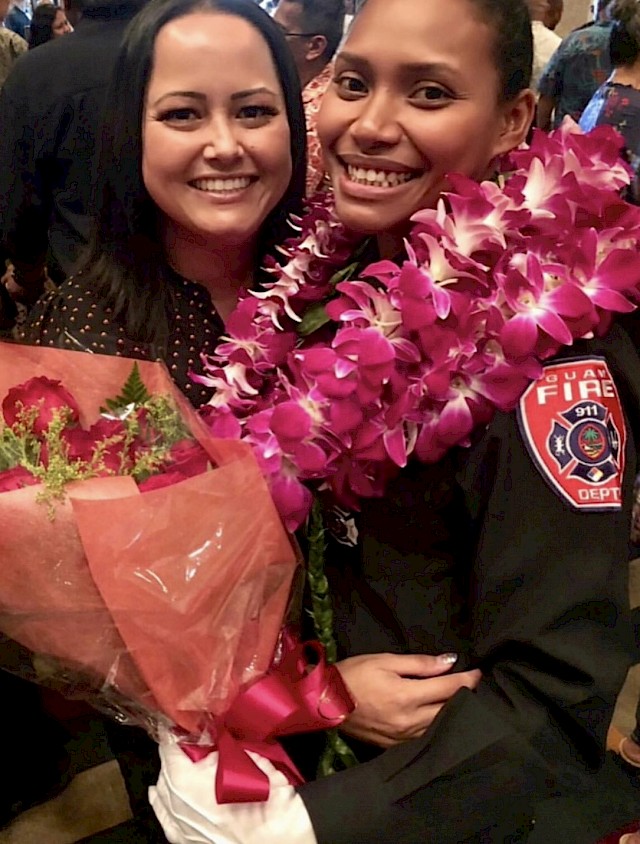 The engagement, long discussed, had only recently become official. Arlene has worked for years as a firefighter on Guam. She ignored a growing pain in 2021, unwilling to take leave while her community fought surges of COVID-19. Unfortunately, when Layla finally got Arlene to have it checked, it turned out to be a rare and aggressive cancer that had already progressed to Stage 4.

After the couple traveled almost 6,000 miles to California for cancer treatments, they learned that Arlene’s prognosis was not what they expected, even with chemo.

The doctor asked if they wanted to fight or go home.

Layla told Arlene, “We're gonna fight. You’re not just a firefighter, you are a fighter.” 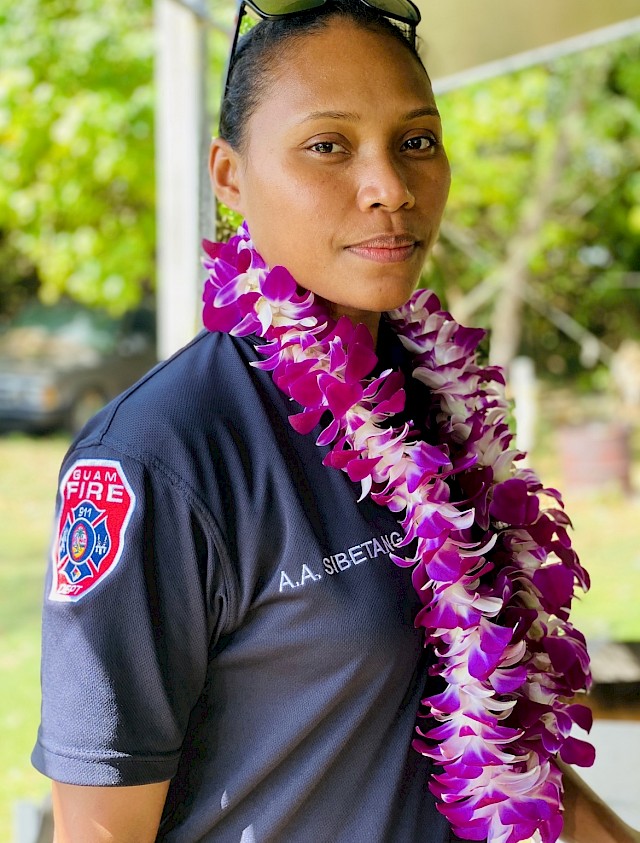 “I just broke down. I didn't have anyone else to talk to about it, you know the news we got. I just started telling her everything… then I just started crying, ‘She asked me to get married. I want to marry her.’”

When Layla started listing all the things she didn’t know how to do in California, like applying for a marriage license, Tracy offered to help. “Don’t worry. Just go to the hospital and be with her. It’ll be okay. I will make some calls to the Chaplain Service to see if they can help.”

The news spread like wildfire. The hospital chaplain called the court, explained the situation, and asked if a marriage license could be pushed through. It came back, signed, two days later. Layla went to local stores to find items for her and Arlene, like rings and matching pajamas. Tracy went through the Fisher House’s decorations to find items that would make it feel like a wedding and got a cake and a bouquet. 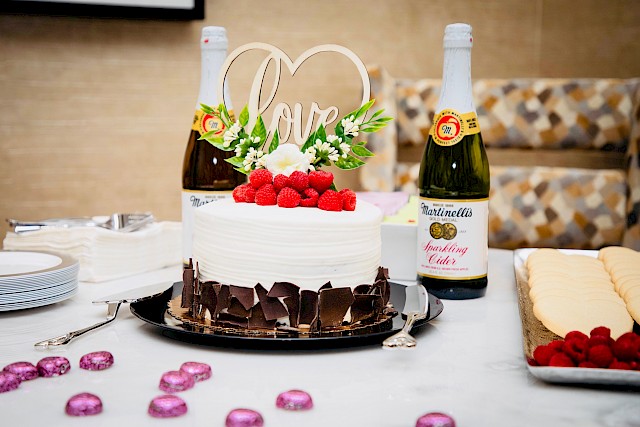 The ceremony came together so quickly, and with so little effort on Arlene’s part, that she was surprised when Layla woke her up and the chaplain came in. There, in the Fisher House, their new friends were arrayed, socially distanced, in pajamas of their own. The assistant manager broadcast the ceremony on FaceTime to family on Guam, as the housekeeper and a hospital photographer took photos.

“From now on, when we say home, we mean Fisher House,” Layla said.

The two women, now happily married, plan to fight through chemo and cancer until this summer.

Layla said of Arlene, “She has always had an uncommon courage, remained compassionate and dedicated. I fell more and more in love with Arlene’s patience, strength, and tolerance throughout the years, not just in our relationship, but also with her work ethic. I knew that I could spend a lifetime of loyalty and love with her.”

Layla’s five kids, including two veterans, still tease their mom’s wife that she can change her mind. “You can still say ‘no,’ if our mom is too much for you. The State of California has a two-week refund.”

But “It’s made her happy,” Layla says. “The residents here, the guests wouldn’t even know that she’s fighting cancer, because she’s so active. I think, emotionally, she’s better off. So now, you know, we just trust God. We do what we can physically, and He does His part spiritually.”

Talk about a sweet ride! Last month Tee It Up for the Troops presented Kansas City, MO Fisher House with a golf cart. Why a golf cart? It’s the perfect vehicle to assist Fisher House guests with getting to and from the medical center. #FisherHouse #LoveIsGoodMedicine…

José and Rosa had no idea they were about to embark on a long journey far from their rural home to save @USArmy veteran José's life. Fisher House is there every step of the way to make it possible. #FisherHouse https://t.co/3ZieLlGNnd

Be ready for hurricane season. Today you can determine your personal hurricane risk, find out if you live in a hurricane evacuation zone, and review/update insurance policies. https://t.co/vE4tTIP9tQ

BEST. MONTH. EVER! Military Appreciation Month – who will you be honoring? #FisherHouse #MilitaryAppreciationMonth

BEST. MONTH. EVER! Military Appreciation Month is here. Who will you be honoring this #MilitaryAppreciationMonth?! https://t.co/7L9uRfswFm

Embrace your courage. Fisher House Foundation understands our military children's sacrifices; we know it's not easy sharing your parents with the country. We celebrate and honor each military child everywhere this Month of the Military Child. #MonthOfTheMilitaryChild

Last day, best day!! @Deltiasgaming1 is getting closer to his goal! You can help him get there. Go check out deltiasgaming's fundraiser for #FisherHouse on @Tiltify | https://t.co/cSlfqVvm7b Watch the stream at https://t.co/8nDPW6HP4O until 4 PM EST! https://t.co/wP7hU5456J

Imagine all the emotions of having a premature baby, recovering from an emergency C-section, and being away from family. U.S. Navy sailor Nathan Chandler and his wife, Erica, were preparing to greet their first child when, at just over 35 weeks, they learned…

Today is the LAST DAY to submit your online application for the 2022 Chairman's Award. This program will award a total of $250,000 to be divided among the top applying nonprofits! Each winner will also receive an advertising package valued at $30,000 from Military Times. To apply: https://www.fisherhouse.org/programs/chairmans-award/ #FisherHouse…

Today is the LAST DAY to submit your online application for the 2022 Chairman's Award. This program will award a total of $250,000 to be divided among the top applying nonprofits! Each winner will also receive an advertising package valued at $30,000 from @MilitaryTimes.

We join Military Times to present the Chairman’s Award. $250,000 is to be divided among the top applying nonprofits making a difference in the lives of our service members, veterans, and their families. Applications for the 2022 Chairman’s Award close…

The deadline to submit your 2022 Chairman’s Award application is tomorrow, April 28! #ChairmansAward #MilitaryCommunity

Time to tag a nonprofit that is going above and beyond for military and veteran communities! The deadline to submit applications for the 2022 Chairman’s Award is this week 4/28. #ChairmansAward #militarycommunity Military Times