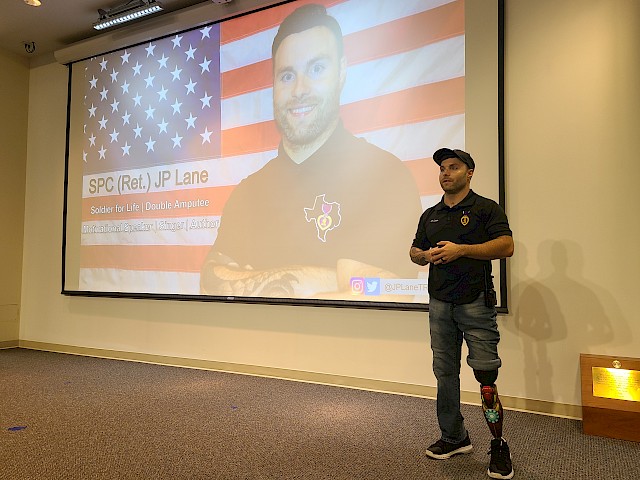 "I died twice on the operating table, and they did 28 surgeries that helped put me back together," said J.P. Lane, an Army combat engineer, about recovering after his vehicle hit an IED while he was serving in Afghanistan in 2011.

His injuries were severe. J.P. was in a coma for six weeks, lost both his legs, and suffered broken bones and missing teeth. His spine was dislocated from his pelvis and he sustained numerous injuries from shrapnel. He counts 26 injuries from the blast of the IED. 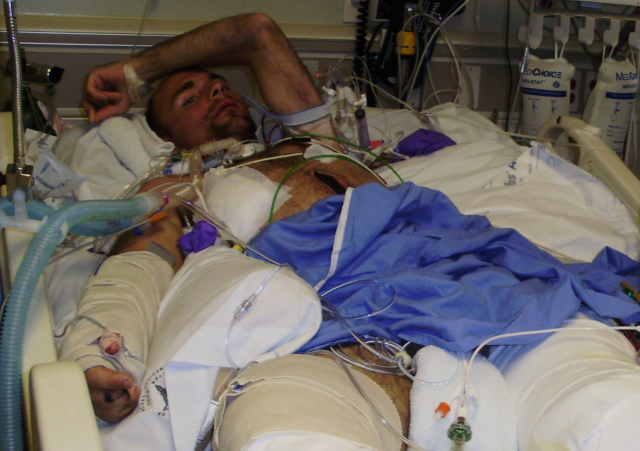 "So, they sent me down to San Antonio," he explained. "I was in BAMC (Brook Army Medical Center) for a while, and the VA polytrauma center as well, both locations for quite a while. And then they finally were able to release me from the hospital and allow me to start at the Center for the Intrepid."

At the time, J.P. was going through a divorce. Staying at Fisher House with his parents and other family members let him find community with both the family that was there and with the staff at the house. 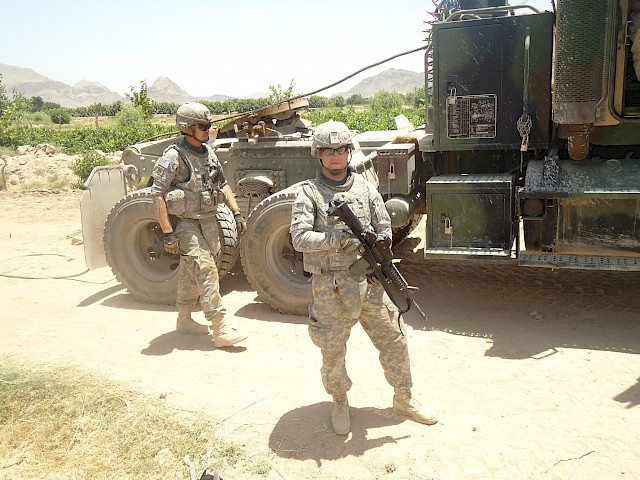 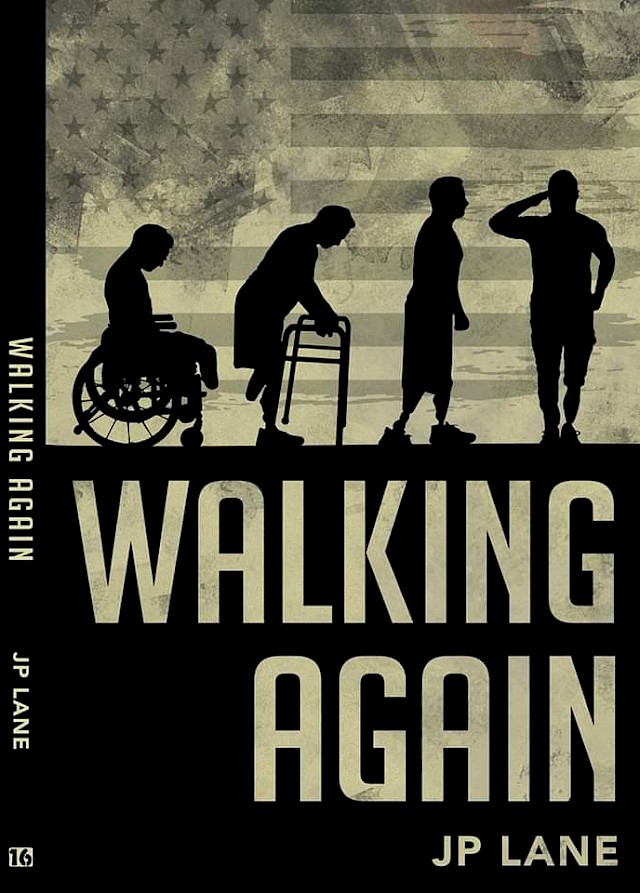 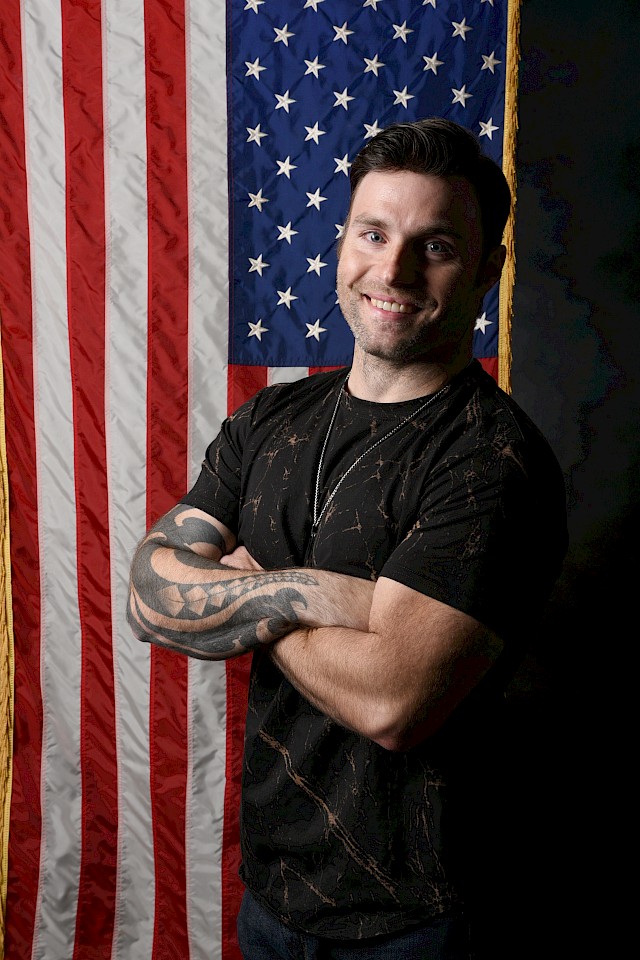 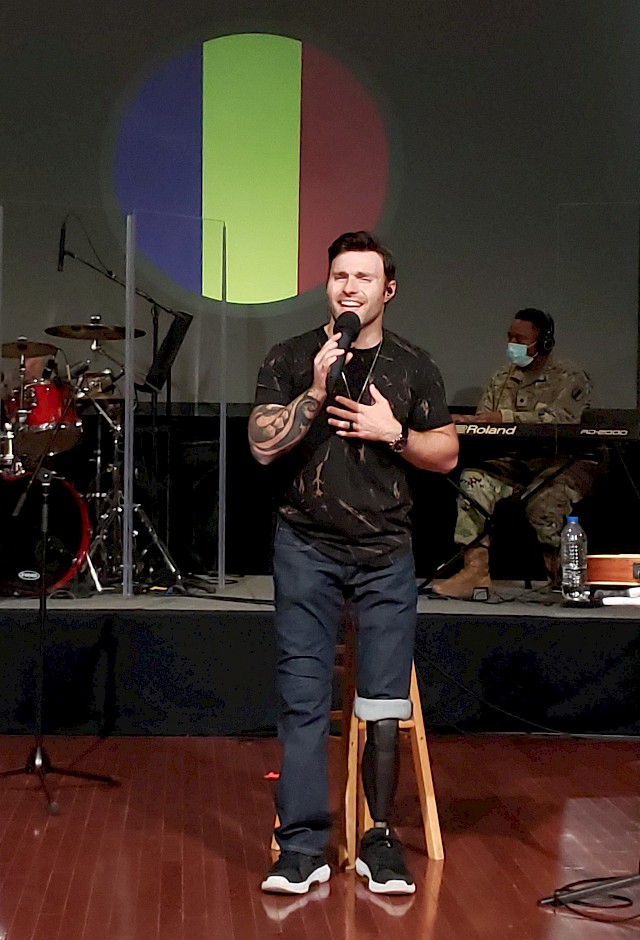 "The staff there was phenomenal," he said.

During his six-month stay at Fisher House, J.P. recalls spending a lot of time in his room thinking about how he would move forward and what his life would be like. He remembers the staff at Fisher House was there for him. He affectionately recalls one staff member who would always make him smile.

"She was always saying, 'Hey, J.P., how are you doing? How are you? How was therapy today?' And stuff like that, just always checking up on me. They knew that I was going through divorce."

"I was very grateful for the staff over at the Fisher House because they became like family," he explained. "They may not have known who we were, but they were always saying hello to all the warriors and just encouraging them and putting a smile on their faces."

J.P. says that Fisher House gave him the privacy and space to heal from his mental wounds.

"There were moments that I remember not wanting to wake up and get out of bed," he said. "It was a relaxing place to get away from the world. When I had my days that I did not want to go anywhere, I just wanted to relax and just keep to myself and have my moments and my peace, just alone. That was the place to be. I stayed there and had my space and was able to just relax,
pretty much recover, mentally and physically.”

Other guests were part of the healing process as well. Most who were staying at Fisher House at the time were other amputees or burn victims.

"We had camaraderie because we were all together in a big house," he said. "It was kind of like, we're used to barracks where we sleep right next to each other and there's no privacy. Well, it was really nice to sleep next to each other in a way but had our privacy. Every family got to stay in their own room, but then if we wanted to hang out, we could go to the living room areas, where they have the games and stuff like that. And we would do that actually quite a bit."

"We played poker, board games, and stuff like that. I honestly don't even remember watching TV," he continued. "We were always talking and just enjoying the time together or cooking stuff in the kitchen. That was always going on. There were a lot of activities that also kept us busy. It was really good. That's for sure."

J.P. and his new wife, Crystal, now spend their time traveling and telling his story to inspire others. He recently began working for the U.S. Army Training and Doctrine Command, telling his story at the Army's 10 Centers of Excellence. 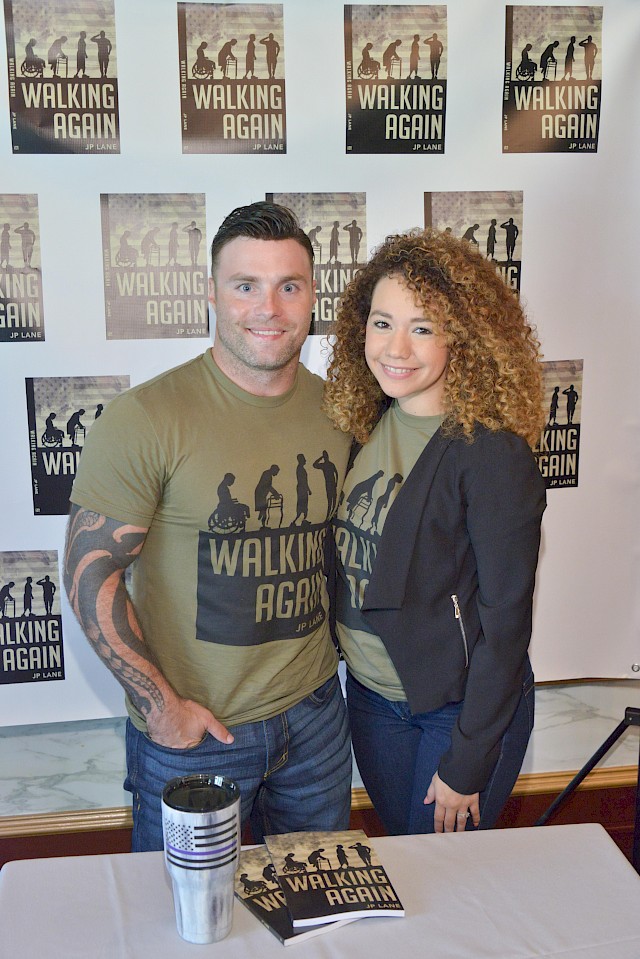 "I tell my story and teach it through a resilience side of things where we can show [other wounded service members] they can overcome anything that they face. I am literally a walking example of being able to do so much."

"I'm not a wounded warrior. I'm just a warrior because I'm healed, and I'm even stronger than I used
to be... That's the kind of the mindset, the positive mindset, that we're encouraging everyone we possibly can to have."

To learn more about J.P.'s story and his mission to inspire others, check out his link at www.jpsjourney.com. His book, “Walking Again,” is also available on Amazon.

Talk about a sweet ride! Last month Tee It Up for the Troops presented Kansas City, MO Fisher House with a golf cart. Why a golf cart? It’s the perfect vehicle to assist Fisher House guests with getting to and from the medical center. #FisherHouse #LoveIsGoodMedicine…

José and Rosa had no idea they were about to embark on a long journey far from their rural home to save @USArmy veteran José's life. Fisher House is there every step of the way to make it possible. #FisherHouse https://t.co/3ZieLlGNnd

Be ready for hurricane season. Today you can determine your personal hurricane risk, find out if you live in a hurricane evacuation zone, and review/update insurance policies. https://t.co/vE4tTIP9tQ

BEST. MONTH. EVER! Military Appreciation Month – who will you be honoring? #FisherHouse #MilitaryAppreciationMonth

BEST. MONTH. EVER! Military Appreciation Month is here. Who will you be honoring this #MilitaryAppreciationMonth?! https://t.co/7L9uRfswFm

Embrace your courage. Fisher House Foundation understands our military children's sacrifices; we know it's not easy sharing your parents with the country. We celebrate and honor each military child everywhere this Month of the Military Child. #MonthOfTheMilitaryChild

Last day, best day!! @Deltiasgaming1 is getting closer to his goal! You can help him get there. Go check out deltiasgaming's fundraiser for #FisherHouse on @Tiltify | https://t.co/cSlfqVvm7b Watch the stream at https://t.co/8nDPW6HP4O until 4 PM EST! https://t.co/wP7hU5456J

Imagine all the emotions of having a premature baby, recovering from an emergency C-section, and being away from family. U.S. Navy sailor Nathan Chandler and his wife, Erica, were preparing to greet their first child when, at just over 35 weeks, they learned…

Today is the LAST DAY to submit your online application for the 2022 Chairman's Award. This program will award a total of $250,000 to be divided among the top applying nonprofits! Each winner will also receive an advertising package valued at $30,000 from Military Times. To apply: https://www.fisherhouse.org/programs/chairmans-award/ #FisherHouse…

Today is the LAST DAY to submit your online application for the 2022 Chairman's Award. This program will award a total of $250,000 to be divided among the top applying nonprofits! Each winner will also receive an advertising package valued at $30,000 from @MilitaryTimes.

We join Military Times to present the Chairman’s Award. $250,000 is to be divided among the top applying nonprofits making a difference in the lives of our service members, veterans, and their families. Applications for the 2022 Chairman’s Award close…

The deadline to submit your 2022 Chairman’s Award application is tomorrow, April 28! #ChairmansAward #MilitaryCommunity

Time to tag a nonprofit that is going above and beyond for military and veteran communities! The deadline to submit applications for the 2022 Chairman’s Award is this week 4/28. #ChairmansAward #militarycommunity Military Times