Of the more than 195,000 charities rated, only three nonprofits have attained more consecutive 4-star ratings. Charity Navigator’s recognition maintains the Foundation’s position in the top 1% of all charities the charity watchdog currently rates.

Charity Navigator rated Fisher House Foundation with 4 out of 4 stars again in 2022, marking 19 years of the Foundation receiving the top grade from the organization. Of the more than 195,000 charities rated, only three nonprofits have attained more consecutive 4-star ratings.

Charity Navigator’s recognition maintains the Foundation’s position in the top 1% of all charities the charity watchdog currently rates. Fisher House Foundation is also one of three military and veteran organizations with an A+ rating from CharityWatch and has received the 2022 Candid Platinum Seal for Transparency.

Since 1990, Fisher House Foundation has been dedicated to meeting the needs of our nation’s wounded, injured, and ill service members, veterans, and their families. The network of 93 Fisher Houses has served 430,000 families and saved military and veteran families $547 million.

In September, the Foundation announced it is on the road to 100 Fisher Houses with three more houses under construction and plans underway for enough houses to pass the 100-house milestone in 2024.

“Fisher House Foundation is grateful for the continued recognition of our careful use of donor funds. We know that our supporters are trusting us to turn their gifts into blessings for our greatest national treasure – our military service men and women, and their loved ones,” said Chairman and CEO of Fisher House Foundation Ken Fisher. “We always take that responsibility seriously and are thankful for their trust.”

The Fisher House network has provided families of patients receiving care at military or Veterans Affairs hospitals a place to stay, free of charge, because a family’s love is good medicine.

In addition to its network of comfort homes, Fisher House Foundation has other programs such as Hero Miles, which provides airline tickets to wounded, injured, and ill service members and their families in support of their continued recovery process, and Hotels for Heroes, which provides free hotel rooms to military and veteran families whose loved ones are being treated at a DoD or VA hospital when a Fisher House is either full or unavailable. The Foundation manages a grant program that supports other military charities and scholarship funds for military children, spouses, and children of fallen and disabled veterans.

Fisher House Foundation is best known for its network of 93 comfort homes where military and veteran families can stay at no cost while a loved one is receiving treatment.  These homes are located at major military and VA medical centers nationwide, and in Europe, close to the medical center or hospital they serve. Fisher Houses have up to 21 suites, with private bedrooms and baths.  Families share a common kitchen, laundry facilities, a warm dining room, and an inviting living room.  Fisher House Foundation ensures that there is never a lodging fee.  Since inception, the program has saved military and veteran families an estimated $547 million in out-of-pocket costs for lodging and transportation. www.fisherhouse.org

It's that time of year again. The holiday season has arrived, and one of the best ways for military families to get in the spirit & spread holiday cheer is by decking the halls with fun & festive holiday decor. Here is a list to help keep you on budget. https://t.co/rxZKvYRLNO

Where the treetops glisten. 🎄 Holiday magic is in the air, thanks to the VoluntEARS from Disney's SALUTE team, who helped make holiday magic come to life for families staying at the Orlando Fisher House! #FisherHouse #NationalChristmasLightsDay #Disney… 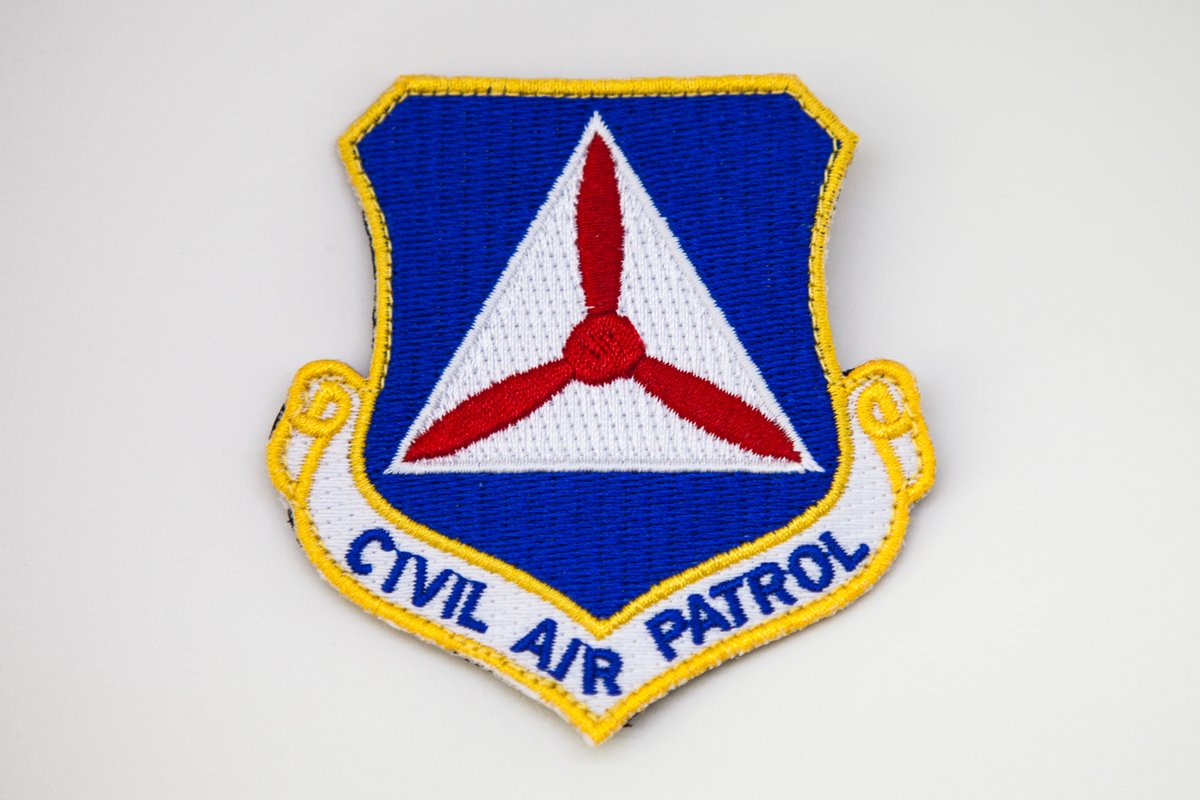 Happy 81st birthday to the @CivilAirPatrol! On this day back in 1941, the paperwork to create the organization that we know as the Civil Air Patrol (at the time written as "C.A.P.") was signed and completed, thus allowing the official opening on this day. #CivilAirPatrol…

Thank you for sharing, posting, and donating to #FisherHouse this #GivingTuesday. Your kindness is impacting the lives of our service members, veterans, and their families. A family’s love is good medicine, and you are helping us be a home away from home… 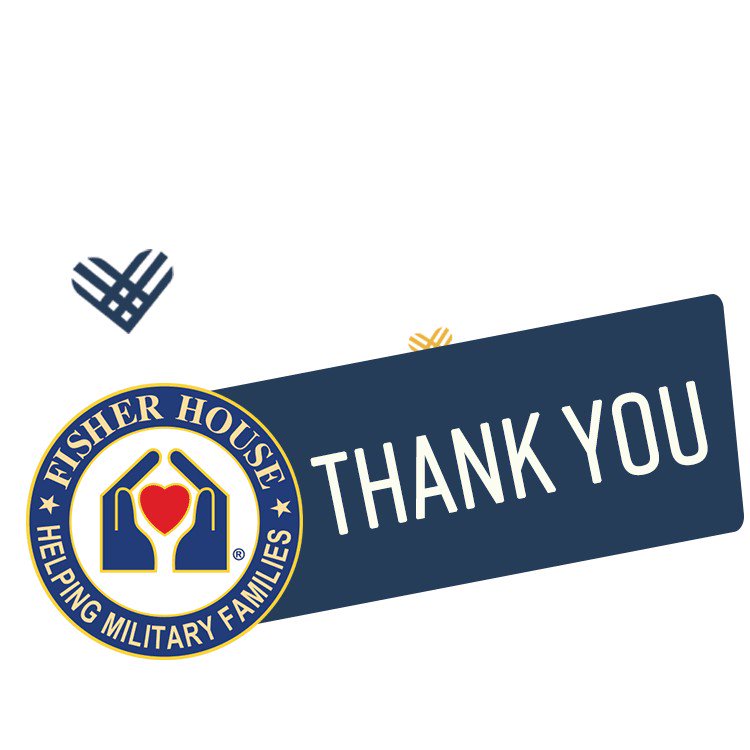 There are just a few hours left to make this the biggest #GivingTuesday yet! Make your donation today! #FisherHouse #LoveIsGoodMedicine

It's not too late to participate and give this #GivingTuesday. We are so thankful for each one of you who’s shared, posted, and donated. Your kindness today is impacting the lives of our service members, veterans, and their families. A family's love is good… 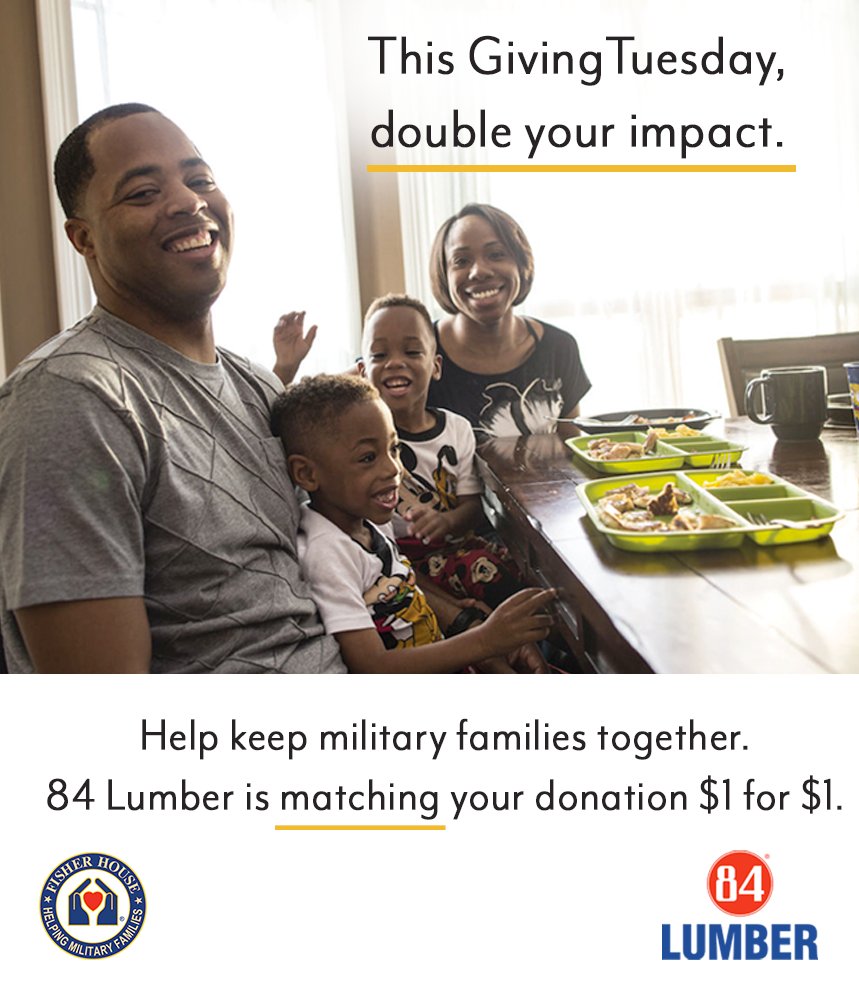 There is still time to get your donation in to make a difference in the lives of our veterans, service members, and their families. #GivingTuesday - together we do good! https://t.co/ogETzl25Kn | #FisherHouse https://t.co/SR4Jp1afjb

We need your vote this #GivingTuesday! @united will donate 1 MILLION miles to the charity with the most votes this week. Vote now - https://t.co/YH1KQyJo9C

Not only is 84 Lumber matching your dollar donations, but Delta Air Lines is matching your Skymiles donation! Up to 10 million miles! #GivingTuesday | #FisherHouse 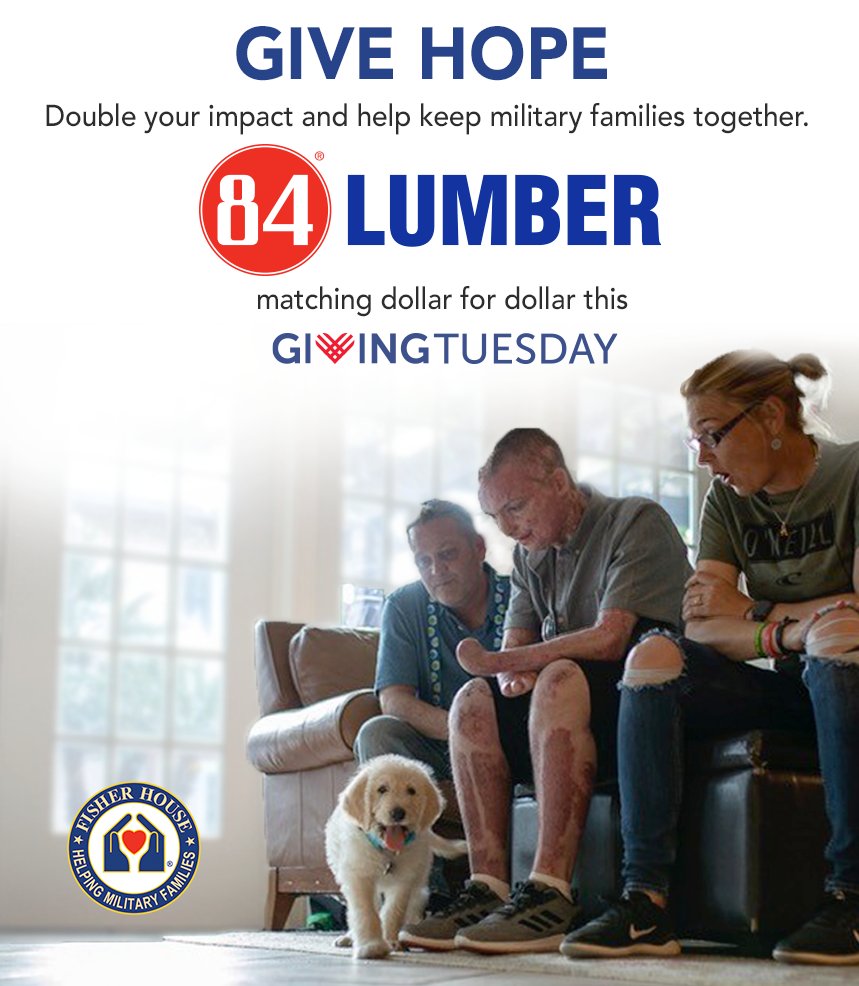 There's still time to give hope to families like the Sutterfields this #GivingTuesday! Donate today, start your own fundraiser, or retweet. https://t.co/BPlnuCVpfb | #FisherHouse https://t.co/Qi7j5WQuq7

This #GivingTuesday, give hope to those who give so much to keep us safe. When you give today, your gift goes twice as far to support our service members, veterans and their families.

Not only is 84 Lumber matching your dollar donations, but @Delta is matching your Skymiles donation! Up to 10 million miles! #GivingTuesday 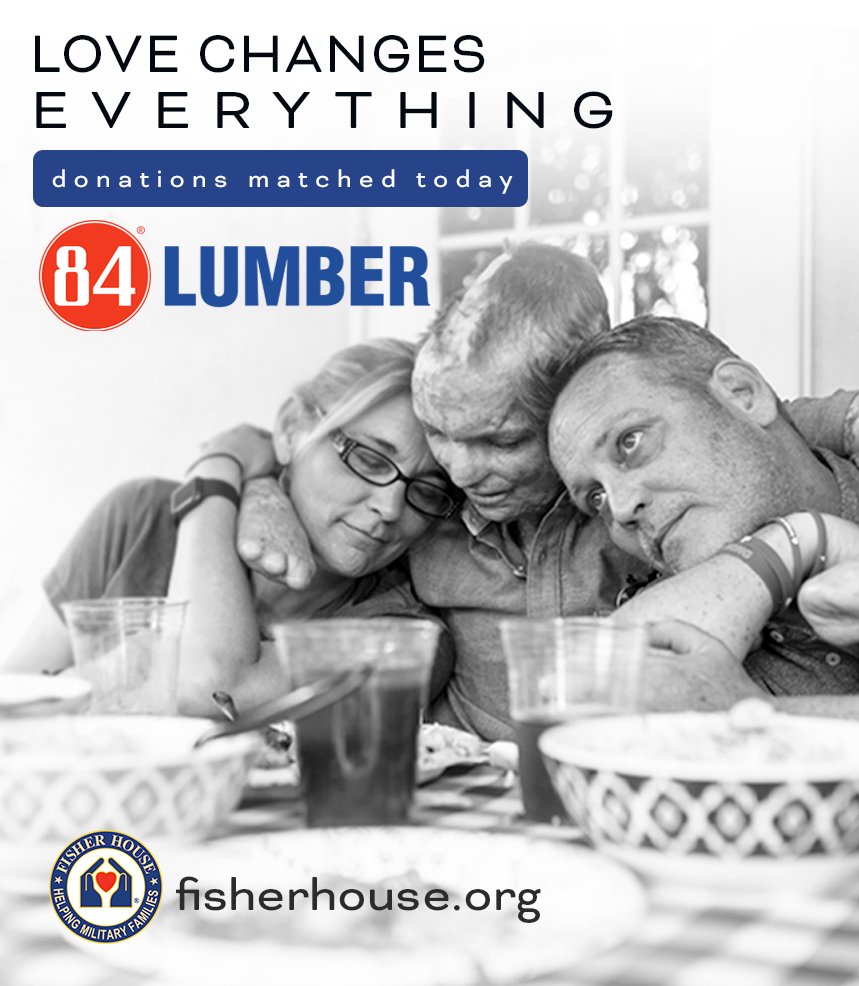 This #GivingTuesday you can give back with a donation, a fundraiser, a tweet, or even an item of a Fisher House’s wish list. Every monetary donation is being matched by @84LumberNews! https://t.co/OXZZbg2A6N | #FisherHouse https://t.co/ghOH9cBV4l

Your gift today goes beyond the immediate. It is an investment in the veterans of the future. Many service members staying in Fisher Houses at this moment were not even born when the first Fisher House opened to families. https://t.co/LcqYQZt3Xt #GivingTuesday #FisherHouse

Together we can make a difference in the lives of our veterans, service members, and their families. Help us keep military and veteran families together. Every donation will be matched today up to $100,000 thanks to our friends at 84 Lumber Company Donate…

Today, we are celebrating #GivingTuesday with @AlaskaAir. All airline miles donated today will be matched by Alaska by Alaska Airlines up to one million miles!! #AlaskaCarelines 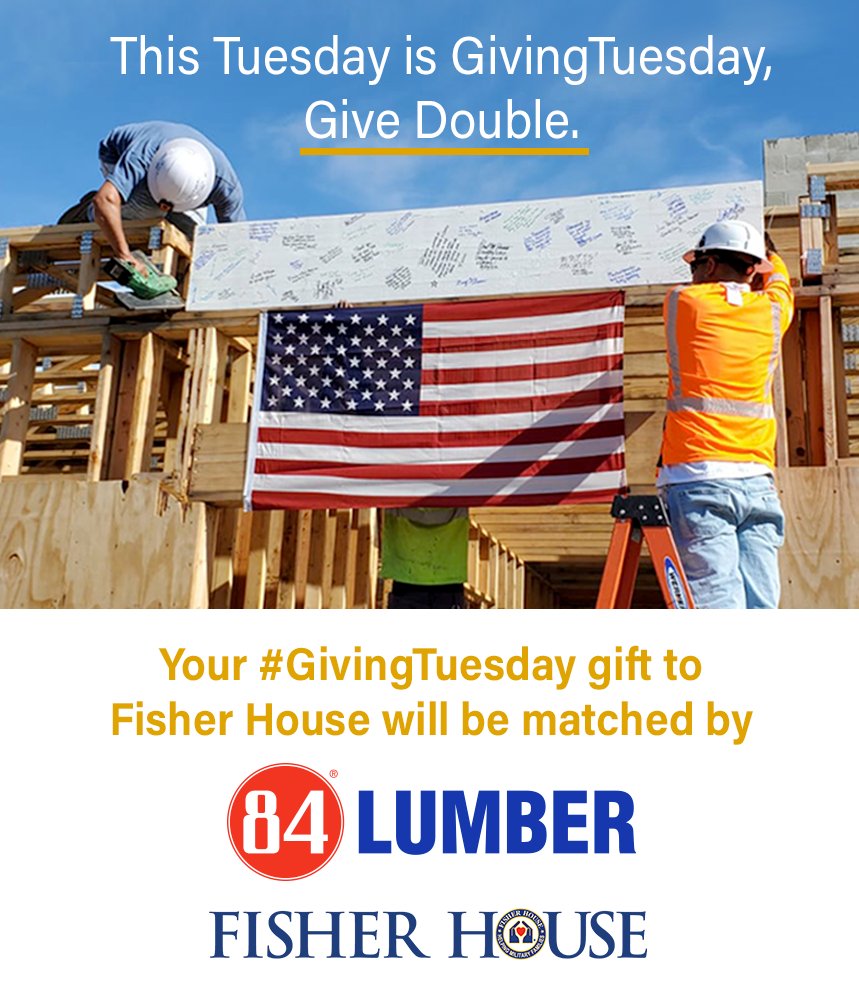 Together we can build a better future for our veterans and service members. Every donation to @fisherhousefdtn is being matched by @84lumbernews today! Donate here: https://t.co/W8GsheT6q7 #GivingTuesday #FisherHouse https://t.co/GcYkvjexRZ